In My Father's Garden 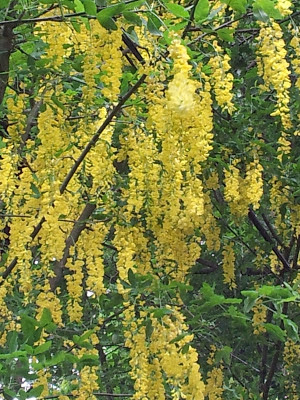 This is a golden chain tree; at least that is what my father called it when he found one growing in the woods behind our house where I grew up. I remember the day he showed it to me. I followed him across the long backyard lawn to the ledge where the woods began. Maybe I was eight or nine. The woods sloped fast down a hill to a gravelly, private road below. Tall pines and oaks and maples grew in these woods, the shaded ground covered in dense fabric: layers of brown pine needles.

This thin tree looked reedy and delicate in the shade, a few yellow petals dangling from it. He’d found a jewel.

I’m going to transplant it, he said. He walked around it.

As usual he had a plan. My father liked to map things out in his head—new highways and byways that included paths and flower beds, stone-dotted trails and walkways through his garden. He’d already picked out a place for it in the front yard.  I thought it was grand. A new tree!  Sure. Why not! The excitement was in the discovery of this sapling in the woods, and then the possibility of what it would become.

So began one of his favorite activities: shoveling dirt. He became someone else when he dug holes. I stood back and observed, offering an occasional nod and approving comment. Looks good, I might say. Maybe I held a shovel—kind of like a nurse assisting a surgeon—passing him the appropriate tool when he asked for it.

Here, hold this will you?

He handed me the shovel, then reached for the trowel in his back pocket, using it to perform close-up, more refined scraping and scooping.

During this process, I listened to his grunting, watched sweat beads spin into the air. Everywhere dirt—on his pants and face, knees, hands, cheeks.  Messes in the garden didn't disturb him at all.  (Messes inside the house, I'm afraid, drew out a different, beastly and frightening response.) But in the garden, he maneuvered, pushed, tugged, carved a moat around the root until all essential parts of the root and trunk released, and he pulled the sapling out like a babe from a womb.

Then he swathed the roots in burlap (towel or sheet, I can't recall) and carried the tree over his shoulder. He offered explanations for each step.  I trailed him, crossing the lawn again, passing through the side yard until we rounded the house and crossed the front yard to a far corner under my bedroom window.  There, he stopped, pointed to the new, anointed place next to the house. He turned the tree upright and placed it carefully into a freshly prepared cradle of dirt.

Next came Dad’s foot stamping dance. Round and round the tree, Dad filled the new hole with sod. He went down on his knees and with his square-shaped hands he kneaded in the loose dirt around the roots again.  He pushed and pressed, tucking and folding in more dirt between spaces, making things snug for the tree.

Thinking about this now as an adult, I see how Dad understood that this displaced tree needed to feel secure, anchored, and most of all—loved. 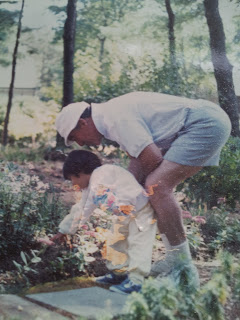 The tree took. It grew tall and lived a long, good life.  Many decades later, I returned to our old house and saw that it was no longer there in the owner's yard, but my memory holds to the vision of it. I watched it bloom every spring, below my bedroom window--those long, brush-like shimmers of gold, proud and graceful. Each year, they returned to show me that my father was more than a scary, raging, distraught self. I needed to know this—those sunny, gentle flowers and garden, they offered proof.