Marathon Bombing in Boston: My Home

T.S. Eliot's words come back again
from...
The Wasteland
I. The Burial of the Dead
April is the cruelest month, breeding
Lilacs out of the dead land, mixing
Memory and desire, stirring
Dull roots with spring rain. 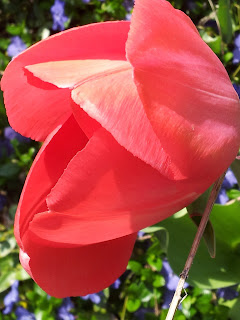 Three miles from my house--it happened. All of it. Two bombs in Copley Square. The Marathon Finish line. I walk there once a week, easy.  The carjacking in Allston? A couple of blocks from the pet store and Staples where I get my supplies. The shootout in Watertown? I've walked there too--a mere 3 miles on a summer day.  Even the street where the two bombers' lived and spent their teenage years--I can stroll across the bridge and enjoy views of the Charles River on my way to their residence, no sweat, if I choose. All of it is skin-tingling close; all of it is impossible to touch--in my understanding of it.

The big question we all want answered.

The big answer we want is: simple. Evil.

But it's not simple. And everyone has a different idea of evil.

The post-midnight shootout, at 1:30 a.m? I heard police cars racing west from our neighborhood to join forces already there.Twitter, live streaming police scanners. Lights on at 3, 4, 5 a.m. until daylight took over. It was a crazy, anxious feeling breaking up any possibility for sleep. We had three computers going. We watched. We listened--hypervigilant--in real time--running between the bedroom and living room. What'd they say? Whaaat? Are you kidding me? For real?

Real, but I didn't feel scared. I felt unified. I felt our collective spirits, our bodies and minds--millions of us--knitting together in the highest regions of hope and faith--together in the middle of the night and all the next day until the moment of the covered, stranded boat. I felt and prayed for a quiet resolution to this madness.

From my Facebook post, April 19: Visualizing: a cup of white light for this evening and a quiet ending. Rain is in the air. 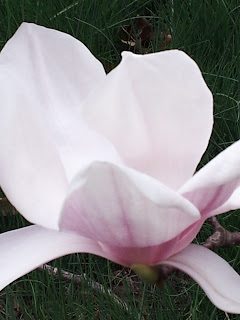 Psychosis. I can't find any other way to see it.  These brothers lost their connection to goodness, to their ability to work things out. They went somewhere murderous and tragic and criminal.

From my FB post: One week ago...is this possible: Feels like a year. Saw this bed of flowers near the hospital yesterday. The vibrancy of color, the stalks stretching their necks upward--I'm trying to follow their lead. This mix of beauty and tragedy so close to home is hard to comprehend. I can't yet grasp it in a satisfactory way. Maybe I never will? Then, the word "compassion" keeps coming up. 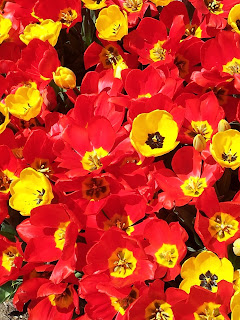 Psychotic. Insane.
And then, compassion and sanity.

From my Facebook post, April 21: This Sunday morning I attended Boston's Trinity Church service at Temple Israel. As a Jew who married an Episcopalian, I was moved to tears by this partnership between faiths. The service took place 2 blocks from the hospital where the bombing victims are receiving treatment and care.  I love this poster on one of the hospital buildings. 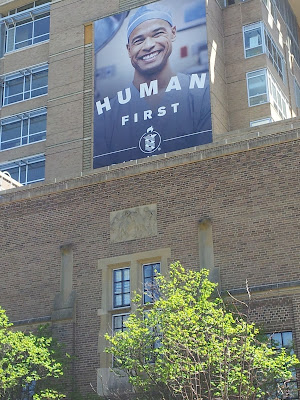 Seeking the root of it. Why it started. How it grew. How it took root. How it...bloomed. 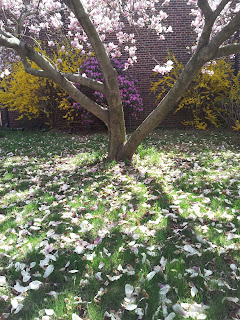 Power is a strange word, isn't it?
From my April 18, Facebook post: Power. It's right here in these petals. No bomb carrying creep can touch the beauty and life energy manifesting in these flowers. The city is bursting with heavenly blooms right now. Everywhere.

The younger brother has since been moved from the hospital (1.5 miles from my house) to a prison 40 miles west of here. He's in a small cell with a steel door. No longer walking distance from where I live, he's going to fade into time's tunnel. Whatever darkness he lives inside, I simply can't grasp it. I hope he follows his uncle's pleas to tell the truth, tell us the whole truth, get down on your knees and ask forgiveness to the families you killed and maimed. 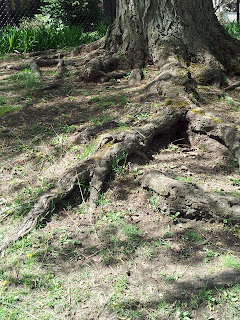 From my Facebook post, April 18:  Boston, Texas. What kind of week is this? For centuries and beyond we have endured our mistakes, our egregious actions and still we move forward. A few of us learn something and remember and certain things get worked out. World news is overwhelming, so begin with your immediate circle: home, family, yourself.  I believe small, daily actions of kindness, honesty, negotiation, ability to take responsibility, wash dishes, make your bed, plant trees lead to bigger, collective improvements.

Still. I will be watching and waiting and hoping this younger brother asks for forgiveness. Why does this matter to me?  I don't know. I don't know.

Or maybe I do know.

Forgiveness, I believe, is linked to insight. Asking forgiveness is an act of understanding, an admission of wrongdoing, and for this surviving brother, a willingness to take responsibility for the death and pain of innocent people.

Awareness of that magnitude? I like to imagine that I'm not asking or hoping for too much. 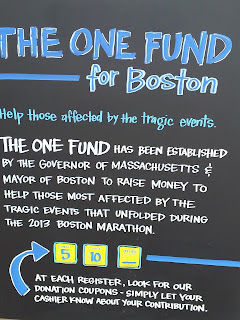