From my transplant journal, Feb. 1980 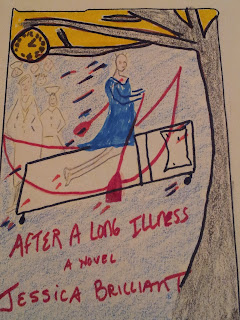 The constant hum of the air flow

White, lift-top table with mirror in it, rolling feet

Though I had been released from the transplant unit at the hospital, I had to remain in a kind of solitary confinement at my mother's apartment. It was wonderful and strange to be "out." At the same time, I was not allowed to see anyone except my mother, my boyfriend, and my father. My parents were separated at the time. It was the flu season and my immune system, immature and vulnerable, made me highly susceptible to life-threatening infections.I also still had a shunt in my thigh, a kind of plastic umbilical cord that had been surgically implanted in my leg before my transplant so that medications and blood could be monitored without sticking me with needles all the time. The shunt was a daily reminder that I was not yet fully birthed from this womb of my former disease.

and these drawings for a book cover for a book that I had not yet written.

I often felt as if my hospital bed were some kind of canoe, that time was a river on which I was traveling, riding waves of  memory and desire for my future.

Posted by Jessica Keener at 7:54 AM